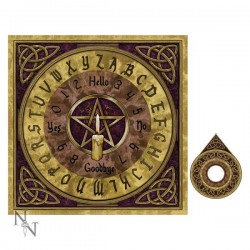 The Ouija/Spirit Board is a tool to communicate with the dead, including famous figures from the past. It has been used over the years by Mediums and Clairvoyants to make contact with the dead and the planchette moves to different answers or letters on the board to clarify this. It was originally used by the China dynasty around 1100 BC and has since become knows as part of the occult. In modern days it has been used by many different groups and individuals but still retains its authentic content from when it began. We are now as a society becoming more interested in the afterlife and its popularity is again soaring. It is a fascinating object which is still used in exactly the same way as it was when it first originated.

Out Of Stock
Spirit Board Classic Style
A classic style talking board which comes with a planchette for spirit readings. This is not a t..
£22.50
Add to Cart
Add to Wish List
Add to Compare

Spirit Board Mystic Aura Anne Stokes
Anne Stokes Angel Board in Mystic Aura design. The back of the board features a poem. Comes with a p..
£22.00
Add to Cart
Add to Wish List
Add to Compare

Spirit Board Skull Print
A gothic design Skull Print Spirit/Ouija Board. Presented in a designed box with instructions for us..
£16.00
Add to Cart
Add to Wish List
Add to Compare

New
Spirit Board Spirit Guide
An Anne Stokes Spirit Board in the Spirit Guide design. The back of the board features a sentimental..
£22.00
Add to Cart
Add to Wish List
Add to Compare
Showing 1 to 5 of 5 (1 Pages)