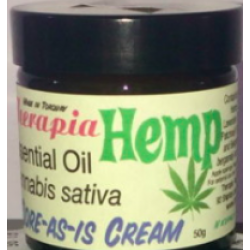 Cannabis gets a bad press, even though it has been a valued herbal medicine for thousands of years. It was widely used medicinally until the 20th century but pressure from pharmaceutical companies resulted in it being outlawed, despite its well-documented medicinal uses.

Recently there has been an increased awareness of the fact that not only is it less lethal than alcohol, tobacco and many other drugs, but that it has valuable medicinal properties and provides relief for acute or chronic symptoms not otherwise treatable with conventional, patented drugs.

Despite legislation to downgrade it to a category C drug (in the UK) it is still illegal to posses cannabis in most countries but there is, however, a legal alternative. Although Therapia’s 100% pure Hemp (Latin name: Cannabis sativa*) essential oil is extracted from the cannabis plant, it is not a controlled substance, offers many health enhancing benefits, is a truly holistic oil and works on both physical and emotional levels. It is also very low in the psychoactive compounds

Out Of Stock
Hemp Cream Therapia Muscle Ease
Contains CBD oil and brings about instant relief from muscle pain. Highly recommend to use at night ..
£15.99
Add to Cart
Add to Wish List
Add to Compare

Out Of Stock
Hemp Cream Therapia Sore-As-Is
This luxurious hemp cream from Therapia works wonders on psoriasis and other skin conditions. A litt..
£9.95
Add to Cart
Add to Wish List
Add to Compare
Showing 1 to 2 of 2 (1 Pages)